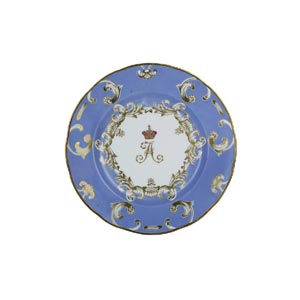 Plate
SAN PIETROBURG, Imperial Manufacture; 19th century, first quarter.Porcellana white, blue and gold front painted with touches of purple red; White in the back
Recto: blue rim with gold volute and, in the middle, in the quarry part, rocaille circle surrounding a large letter A crowned in gold and purple.
Towards: green mark of Imperial St. Petersburg factory and number 93 (Graesse 1919, p.260 No. 16).
Ø cm.25; H. Cm. 3.Cond.: excellent.The beautiful plate was part of a service realized in the first half of the XIX century , from the Imperial Manifatture of St. Petersburg. The letter A overlaid by an imperial crown is probably referred to Alexander I, who ruled from 1801 to 1825. The number 93 indicates that the service consisted of many elements.