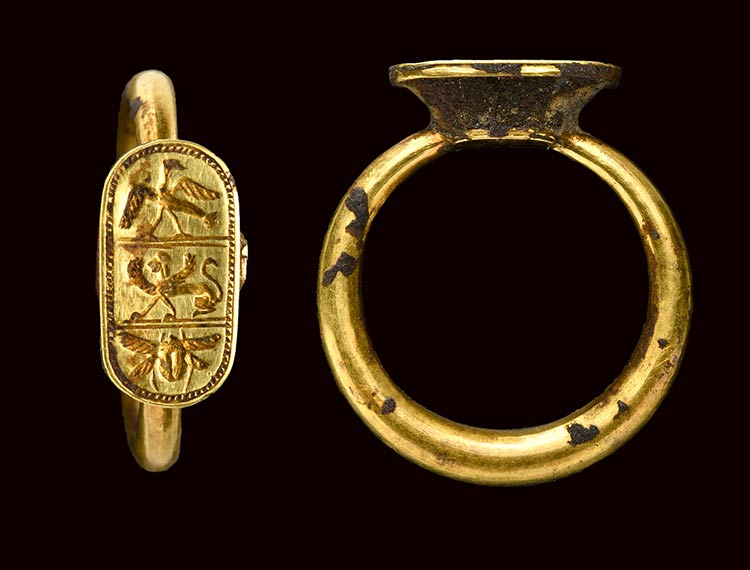 An etruscan gold ring with engraved bezel. Cartouche with animals.
Bezel 7 x 13 mm; diam. 16 mm; gr. 5,30
Ring with tubular hoop and small elliptical cartouche bezel, with engraved decoration on three areas. In the center: a winged sphinx sitting; above: volatile; below: scarab with four wings. All around, the frame is drawn ("cordonata"). Each register is separated by a double base line. This ring is a type of phoenician origin, widespread in the 7th and 6th centuries in many centers of the Mediterranean (Carthage, Sardinia, Spain) and widespread in Etruria. The piece is compared with a ring from Cerveteri (Rome, Villa Giulia Museum , Castellani Collection, inv. 54519) and with copies of the British Museum. The iconography with solar symbols and with the scarab is certainly traceable to Phoenician models, while the presence of the sphinx leads back to the Etruscan tradition of the first half of the 6th century. Slight gigns of marks, deposit of patina and residues (intact). Splendid specimen; excellently preserved and rare. For comparison: Aa.Vv., L'Oro degli Etruschi, edited by M. Cristofani and M. Martelli, p. 288 n. 126; p. 297 n. 175-176. This lot is listed in an invoice from parisian gallery Mythes et Légendes by Michel Cohen in 1986, mentionning that the piece was formerly in Arthur Sambon (1867-1947) collection.
Mid 6th century BC.