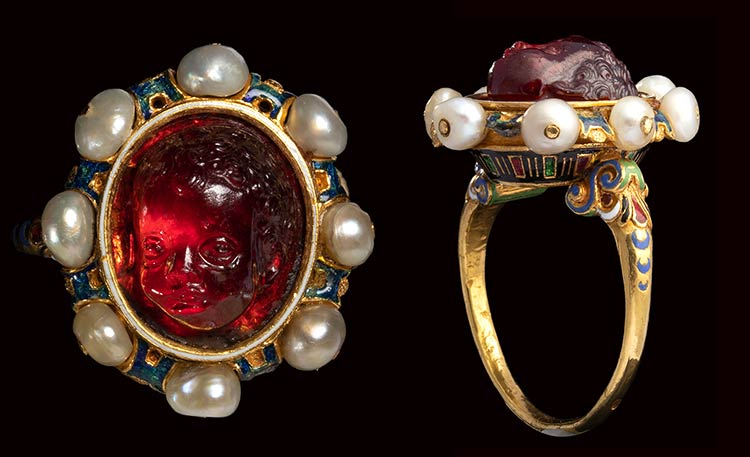 
An extraordinary papal gold ring, pearls and polychrome enamels with hyacinth cameo, belonged to Gregory XIII and made by the famous goldsmith Giacomo Anfossi in the second half of the sixteenth century.
Bezel 15 x 18 mm; diam. 22,5 mm circa; gr. 17,46


On the upper part of the ring is a yellow gold bezel with a high relief-engraved hyacinth cameo, representing the face of a putto in three quarters (cherub).
The gem is framed by eight pearls and the bezel is embellished with enamel decorations that accompany them with the pattern. "GREG XIII" is engraved in the lower part of the bezel. Oval punch depicting an owl. The materials of the ring are: yellow gold with enamels, scamazze pearls and an engraved hyacinth of diam. of 35 mm.
Anfossi, famous Roman goldsmith, began to work for the papal court in 1548 and entered the service of Pope Gregory XIII Boncompagni in 1573. Ring destinated to the personal use of the pontiff, as devoid of signs or papal symbols, with rich decoration in enamels (blue, red, black, white). The engraving on the back shows with certainty that the ring belonged to Pope Gregory XIII Buoncompagni born in Bologna in 1502 and Pope from 1572, who celebrated the holy year of 1575 with great solemnity: most likely, the creation of the ring matches with this date. The attribution to Anfossi (born in Pavia in 1505) is based both on stylistic comparisons and the documentation of the works, carried out for the papal court starting from 1548 and then passed to the direct service of the pope in 1573. Extraordinary quality of stone, vivid colors. The sources attribute to the hyacinth marvelous virtues: it makes become invulnerable to lightning, to the plague, it helps a deep sleep, restores the heart and the spirit, it increases power and wealth (Santini De Riols 1986, pp. 88-89). According to Gerolamo Cardano, physician, mathematician and philosopher who lived in the XVI century, "the men of authority attribute many great praises to the hyacinth ......... the really good one is red and rarely exceeds by the size of a lentil" .
Ex Bulgari Collection
Published in “Gioielli, moda, magia, sentimento”, a cura di Stefano Rocca e Maria Teresa Balboni Brizza, Catalogo della mostra presso l Museo Poldi Pezzoli di Milano 26 sett. – 2 nov. 1986 p.53; Bulgari 1958, vol. I p. 57 e p. 283, tav. 22; L'arte degli anni santi 1983, p. 172 tav. III 8.2. The History of Bulgari, fig. 20.
Last quarter of the 16th century.