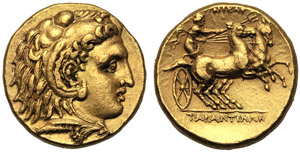 It has been discussed by scholars about the chronology of this specimen but now it is widely accepted that the stater of Tarentum, with Herakles on obverse and the biga on reverse, was produced during the phase of Pyrrhus' intervention in Magna Graecia. Vlasto placed it in c. 281 BC but the current theory holds that the issue belongs either to c. 280 BC, as suggested by Rutter, or to the period c. 276-272 BC, as suggested by Parente and Fischer-Bossert.