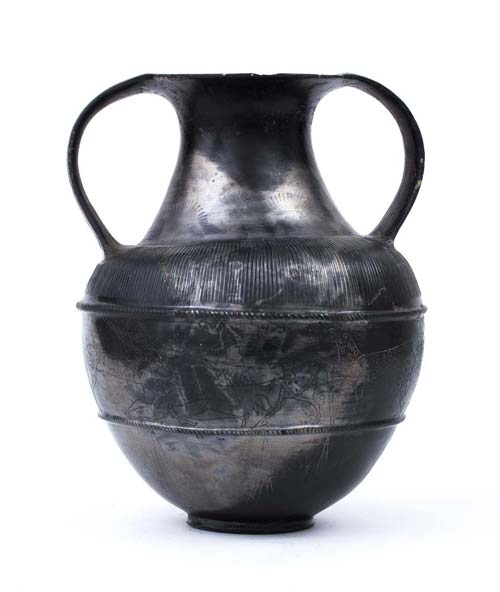 Outstandig Etruscan Bucchero amphora with silver patina
Late 7th century BC
height cm 25 (9,8’’)
With shining silvering, characterized by a refined graffite decoration consists of small fans on the neck, stylized geometrical patterns on the handles and fluted motives on the shoulders; an elaborate hunting scene on central frieze: a sequence of four animals (a bovine with twisted tail, a griffon, a horse with reins and a panther) introduces a couple of fighting centaurs; one of them is armoured and kills with a spike the other centaur which is depicted with a prey.
The hunting scene and the fighting centaurs come from the Orientalizing tradition, here probably with a peculiar arrangment: the armoured centaur, symbol of the Italic world, confronts the Greek counterpart, still connected to its wild nature. This shape and the beautiful silvering patina confirm the vase destination to a funerary context, as attested in several examples from Cerveteri.

PROVENANCE
Property of a gentleman; acquired on the European art market between 1960s and 1980s.