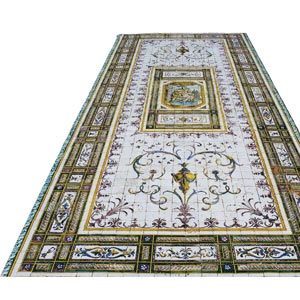 Floor mosaic consisting of square majolica terracotta tiles.
NAPLES. Produced by a local workshop to a model in the style of Vanvitelli. Central figuration painted by Berardino Gentili. Overall decorative pattern by anonymous workshop decorators; 1740s–50s.Majolica of considerable thickness and excellent quality, white-grey in colour, painted in polychrome in shades of light and dark manganese violet, olive green, bright and dark yellow, and pale sky blue.
Tiles: square; to the number of 1,298; 21.5 cm square; <2.2 cm.>.
Current size of the mosaic: rectangle measuring 11.85 x 5.30 mt; covered surface: 62.50 sq. mt. Condition: excellent. Thermoluminescence: Bari, Centro studi di Radioattività e Radioecologia, prot. n. 112CSRR/94, dated 20/01/1994:
1747–57
Bibliography: Gardelli 1994, pp. 26 – 31.
At the heart of the complex figuration on this splendid 18th century floor we find the Bible story of Susanna and the Elders. The condition of the majolica surface, which shows no sign of ever having been trodden upon, suggests that the mosaic was intended for a large basin in a garden, a fashionable feature in the huge parks of 18th century villas. The central subject, showing a young girl on the point of bathing, also appears to bear out this contention, which is further endorsed by a series of clues such as the tiles missing where the water would have emerged and the decision to darken the white bottom, probably in order to soften the sun's reflection which would have been too dazzling on the water.
The overall decorative scheme points to the design of an expert architect au fait with the latest developments in Mittel European art. The composition reveals an extremely elegant rationalism typical of the cultural climate of the Enlightenment.
The type of clay used for the tiles, their dimensions, the glaze and the tonality of the palette all point to a Neapolitan workshop of the 18th century, and that date is confirmed by thermoluminescence which has assigned the mosaic to the decade stretching from 1747 to 1757.
The architect who designed and drew the structure of the floor and the artist who painted the central picture have yet to be identified for certain. In fact at least two painters were involved, one painting the actual picture and another, more anonymous hand responsible for the decoration.
The scene of Susanna bathing, based on a celebrated engraving by Annibale Carracci (1593–5) replicated by Jean Mariette in the 17th century, is found also in numerous ceramic figurations, in particular in those produced by the workshop in Castelli, a town which belonged to the Kingdom of Naples (Gardelli 2012, p.2 6). The palette is brighter than in the rest of the decoration, and the girl's facial features and pose recall the style of the Gentili workshop.
Underlying the floor's entire figuration, on the other hand, there is a design echoing the style of the architect Luigi Vanvitelli (1700–73) whom Charles de Bourbon (King Charles the VII of Naples, V of Sicily and, eventually, III of Spain) called to the court of Naples to build the splendid royal residence known as the Reggia of Caserta.

We do not use cookies of this type.
Accept selected Reject Accept all