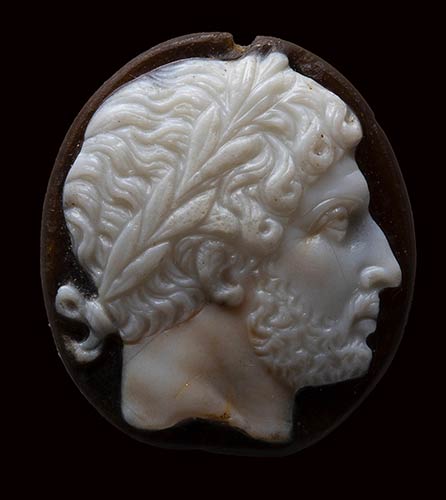 A roman two-layer agate cameo. Portrait of the emperor Hadrian.
15 x 17 x 4 mm
The effigy of the roman emperor P. E. T. Adriano (76-138 AD) faces to the right and presents the laureated head. The face is typical of ancient production, in the laureated version, and is taken from the classic prototypes of the roman coins. The face is framed by a mustache and a finely dashed beard; the nose is slightly prominent; small lips; the iris of the eye is incised and turned upwards; the thick wavy hair is carried out according to the same structure as the roman coins, with heavy curved wavy locks framing the face on the forehead (see emperor's denarii; carnelian carving, bust of Hadrian graduated, National Archaeological Museum of Naples, n. inv. 26094/256). The laurel wreath is tied on the back of the neck by a knotted ribbon. Taking into account the dimensions, the intaglio is executed with technical expertise, aimed at a certain more realistic and expressive physiognomic similarity, less idealized than the official portraits of coin cones. The stone presents ancient wear marks and a evidences of a former slight contact with heat; deposits of reddish patina due to contact with iron oxides. The cameo is crossed vertically by a tiny through hole, partly occluded by ancient ferrous material. Small splinters on the edge (partly reworked) and slight heat cracking on the back at the center of the bezel (in correspondence with the through hole). Sardonyx agate in two layers (white layer for the relief, brown-colored sardonyx type for the bottom). Specimen of great rarity. UK, private collection. For comparison: The subject has been extensively reproduced since the Renaissance, according to a different stylistic rendering and a different aesthetic interpretation based on the taste of the time (see cameos depicting the emperor Hadrian in the collections of the Hermitage Museum, St. Petersburg, n. . inv. K1768, K1446. Adriano. Architecture and project, exhibition catalog, 2000, pp.250 ff., R. Mambella, Adriano, L'uomo e l'artista; Le gemme dei Medici al Museo degli Argenti. Cammei e intagli nelle collezioni di Palazzo Pitti (coordination Ornella Casazza), 2007 (reprint 2010), pages 237, No. 198, pages 250, 230, C. Evers, Les Portraits d'Hadrien: typologie et ateliers, in "Collection des Mémoires de la Classe des Beaux-Arts "in -8 °. 3e series, T. VII, Bruxelles, 1994; A. Pangerl, Portraits. 500 years of Roman Coin Portraits, pp. 84-86.
2nd century AD.