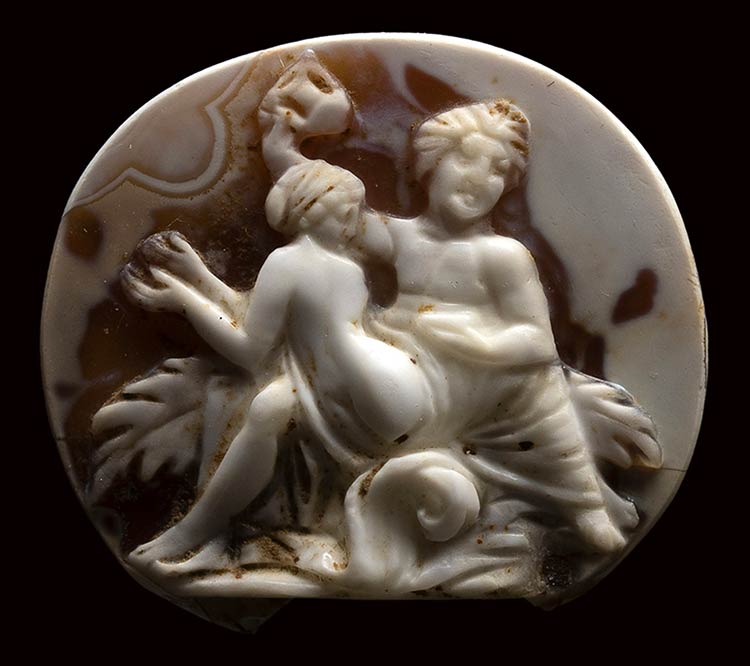 A very fine roman sardonyx cameo, referable to the Sostratos's workshop. Satyr with a nymph.
25 x 23 x 3 mm
At the center of the scene, a partially draped nymph is clapping her hands (rather than holding a cup) and is half-lying in front of a young satyr. The male character is naked, sitting on a basement and slightly tilted back, keeping his feet crossed as a sign of rest; with his right hand he holds up a cup with two handles, with his left hand a small flat container. His body is turned leftward, is characterized by an accentuated musculature and it is slightly twisted in three-quarters; the head (with thick hair and rebel locks) is in three quarters and tilted to the right, gazing down. The body of the nymph is partially naked (the dress cover the legs only) and carries a hat (sakkos). Behind the base on which the male figure rests, branches (of palm?) emerge, while below a drapery and unusual vegetal elements are visible (branches and curved vegetable termination, Corinthian angular volute type). Extraordinary variety of variegated sardonyx. The figures are engraved in the white layer, while the bottom is brown and orange with nodule veins. The stone is partially burnt and present superficial burned white-yellowish areas. Chipping with lack at the bottom. The figures can also be variously interpreted as Dionsio and Arianna, but the young physiognomy of the male figure, devoid of attributes, is more identifiable with a satyr (absence of crown of grapes or ivy on the head, garment). One of the most striking features in this valuable work is the crossed pose between the two characters, who look at each other even if they have an opposite orientation of the bodies (inspired by Greek vascular models). An extremely interesting comparison comes from the Beverly (Alnwick Castle) glyptic collection, where there is a variation of this scene executed in the 16th century. The subject of this modern sardonyx double layer (white and brown), once a collection of Cardinal Grimani, is considered as taken from an ancient model, "later dispersed" (Vico, tav. 8, with the motto "si vina tollas et Venus statim perit Nec dulca quidquam restit hinc mortalibus "). In this variation, Pan also appears, playing a Flute Pan (syrinx) while observing the two characters under a tree. The scene is enriched with details compared to the ancient model, like vases or characters of the Dionysian country sphere. For the pose, it is also interesting to compare it with another sardonyx cameo depicting a satyr and a maenad, Beverly collection (once by Cardinal Grimani, Vico table 24, "Laetitiae Symbolum- Dulce Melos Lasciva Venus Vinumque suave, Hec tua Laetitiam praebent curasque resolvunt "; see also Bober / Rubinstein n. 94). Taking into account the date of the cameo, it is both interesting and suggestive to propose a parallel between the Dionysian repertoire with the court of Antonio and Cleopatra in Alesssandria. In this city the activity of engravers at the service of Antonio and Cleopatra was intense and the sources state that the two corresponded with onyx and engraved crystals (small vases and cameos); The diffusion of the Dionysian motive obeyed a precise ideological requirement. Dionysus, the god who returns from the East with the thiasos of satyrs and maenads, was favored by Alexander the Great, who had assimilated him. The resumption of the motif of the Dionysian thiasos is wanted by Antonio between 40 BC and 31 BC, as evidenced by his life written by Plutarch. Antonio was the new Dionysus in his entry to Ephesus in 41 BC, in the triumph of 34 BC in Alexandria: the motif of the Dionysian thiasos became political ideology and was represented on some cameos. Comparing the engraving style of this sardonyx cameo with the coeval production, there are many similarities with the activity of Protarchos’ workshop, and in particular of Sostratos. The cameo presented here can refer then to the of Sostratos’ workshop and could have belonged to the collection of the famous collector Cardinal Grimani, who in fact made a copy of it in sardonyx in the sixteenth century (the ancient model was considered missing). For comparisons: D. Scarisbrick, C. Wagner, J. Boardman, The Beverly Collection of Gems at Alnwick Castle, 2017, p. 13 n. 8 and p. 25 n.20; Boston, Beazley, LHG n. 136; Antonio Giuliano, I Cammei della collezione de Medici del Museo Archeologico di Firenze, pp. 25 ss. ; S. Toso, Fabulae Grecae, Greek myths in the Roman gems of the first century. BC, pp. 196-197. UK, private collection.
End of the 1st century BC.